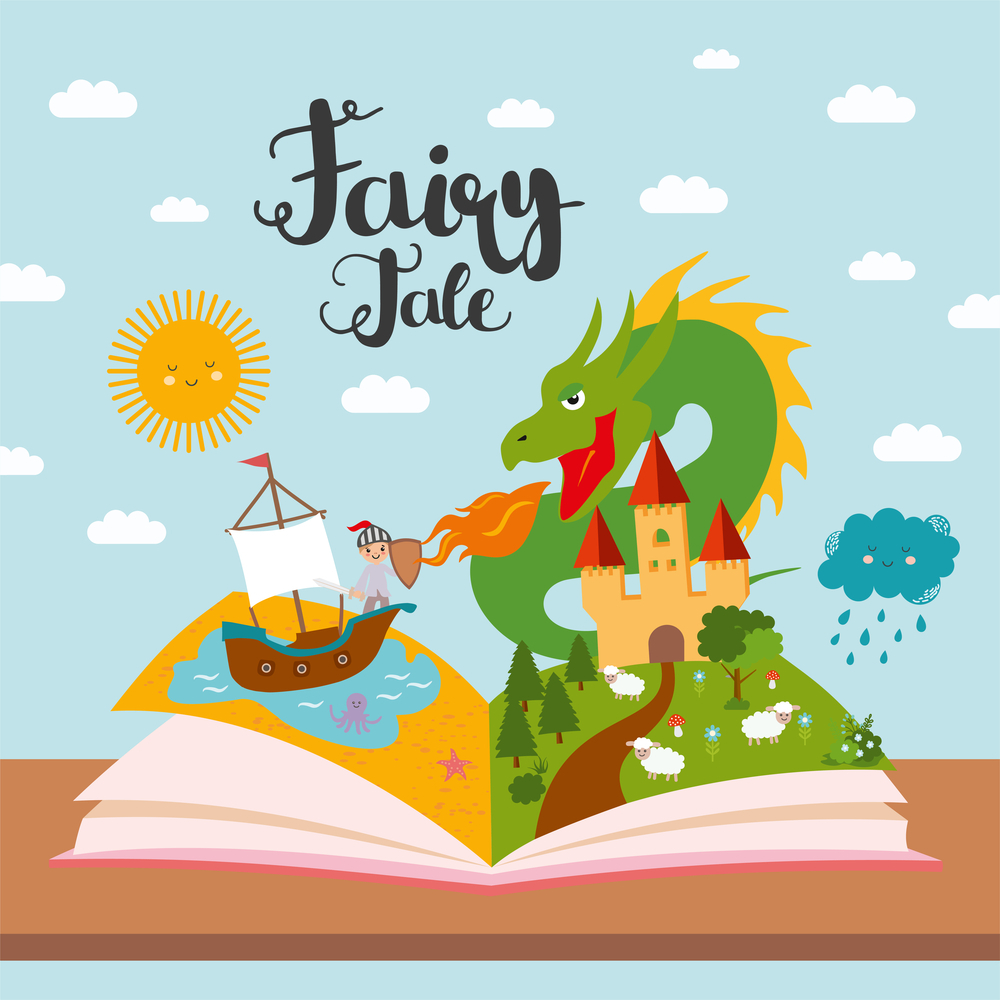 A fairy tale is a story, often intended for children, that features fanciful and wondrous characters such as elves, goblins, wizards, talking animals, and even, but not necessarily, fairies. The term “fairy” tale seems to refer more to the fantastic and magical setting or magical influences within a story, rather than the presence of the character of a fairy within that story. Fairy tales are often traditional; many were passed down from story-teller to story-teller before being recorded in books.

Early fairy tales were dark and foreboding, with plots not suitable for a young audience. As written versions evolved, they included happier endings. In the original Hansel and Gretel, for instance, both the mother and father intentionally left the children to die in the woods.

Fairy tales are categorized by their elements, types, or motifs. Here are some of those types and examples of stories that fit those types:

What Books Are Considered Fairy Tales?

Here are some of the key elements that make a fairy tale what it is: 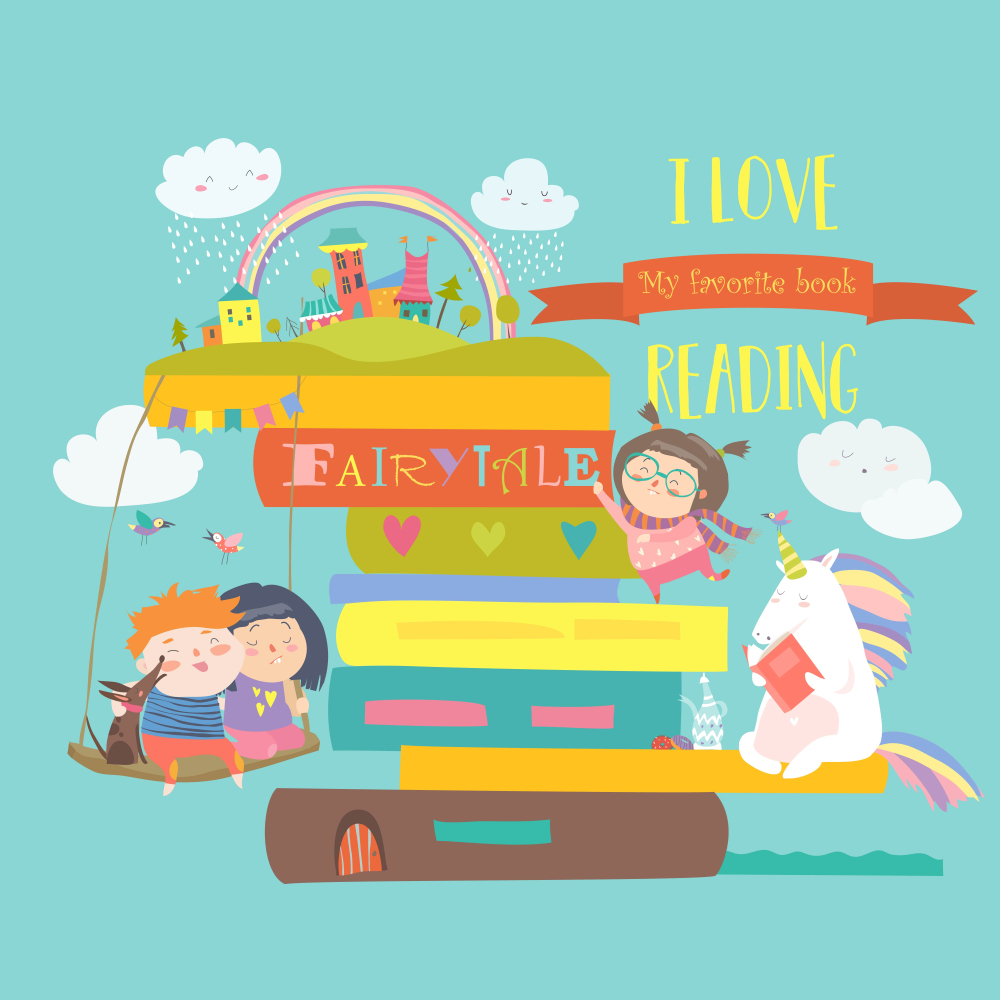 The protagonist of a fairytale is never a superhero, a fairy, and a magical creature. Fairy stories are about someone ordinary, someone seemingly unimportant, who then travels into an extraordinary realm full of wonder, and magic, and fantastical beings. Often, this is a normal, somewhat discontent human child who leaves behind the monotony and difficulties of real-life to travel into the Perilous Realm of Fairyland.

True fairy tales have a certain sense of wonder. Fairy stories don’t have to contain adventure or an allegory; it’s not even essential that they are fantasy in the genre. But this “elementary wonder” is a vital part of a true fairy tale.

An important fact about Fairyland is that it has rules. In Fairyland, anything can happen—magical, whimsical, fantastical things—but they all happen very reasonably and according to the rules of the place. This doesn’t mean that these laws can’t be broken—the very definition of a law is that it CAN be broken—but only according to reason.

Fairy tales are meant to be retold. The new stories will carry some element or some inspiration from a story that has already been told.

A true fairy tale has meaning—a reason for reading beyond entertainment or escapism. A fairy tale that contains true wonder and beauty cannot help but have some sort of meaning.

Some very famous fairy tales include Elves and the Shoemaker, Emperor’s New Clothes, Frog Prince, The Gingerbread Man, Goldilocks and the Three Bears, Hansel and Gretel, Jack and the Beanstalk, Little Red Riding Hood, The Pied Piper of Hamelin, Pinocchio, Princess and the Pea, Sleeping Beauty, Snow White and the Seven Dwarfs, Three Little Pigs, Thumbelina, Ugly Duckling and others.

Fairy tales can include magic, talking animals, or a touch of realism. Unlike fables, fairy tales don’t always contain a moral or lesson, they can be pure entertainment but often teach about consequences and values like kindness and patience.

How Do You Write a Fairy Tale Book?

In fairy tales, there are no defined rules. So, you have the freedom to decide how you want to construct and use your fairy tale. 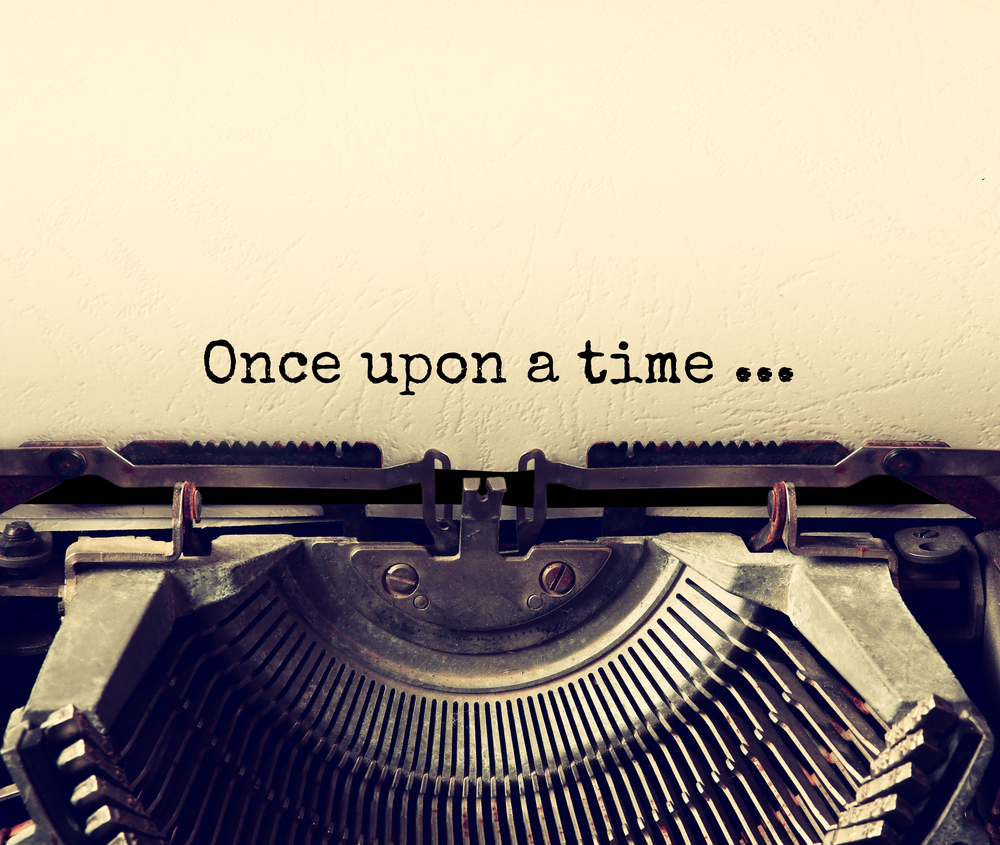 Some of the common themes include:

There are many generally accepted characters in fairy tales. Virtually any magical character is acceptable and expected in a fairy tale: dwarves, dragons, elves, witches, wizards, fairy godmothers, sprites, and so on. Fairies can appear in fairy tales, but certainly do not have to. Choose characters with traits that serve your story-telling purposes. Some common traits for your hero or heroine could be kind, humble, innocent and kind-hearted. They must be someone that your reader could relate to and feel something for. Therefore it is a good idea to make your main character a normal, everyday person who could change throughout the story. Think about Jack in Jack and the Beanstalk or Snow White. A fairy tale without a villain would be pretty boring. Create an evil character to test your heroes’ abilities and cause them some pain. The villain in fairy tales is normally the source of conflict. For example, they might stop your hero from achieving their goals or hurt them in some way. Some common villains include the Big Bad Wolf, Cinderella’s stepmother, or the evil queen. 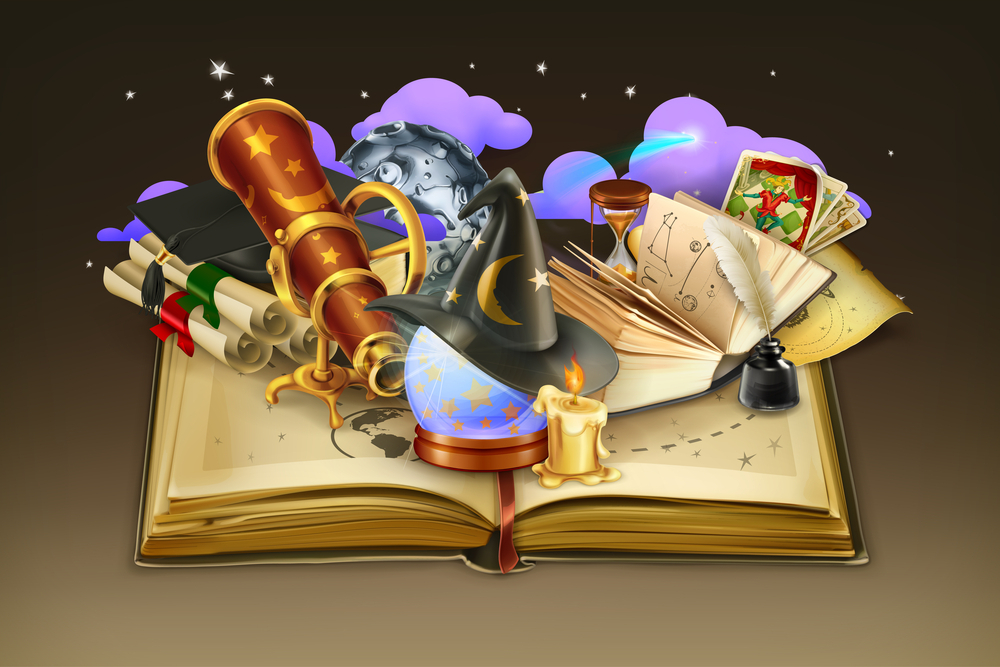 Because fairy tales are short, there’s no time to have fully-developed characters or exquisite storylines. Instead, fairy tales are filled with archetypes, or even what we now consider clichés. Most fairy tales follow one of two basic plots. Needless to say, there are many more plots and variations on them, but these two are the easiest two to use in your very own fairy tale. The first one, called Rags to Riches, is about a poor person, hated by their family or the entire society, but somehow manages to climb the social ladder and eventually even ends up as a member of the royal family. The second one is called Overcoming the Monster. As you might have guessed, it’s about how the hero is threatened by a monster or an evil being and sets out to slay it. Obviously, they succeed and live happily ever after. So, the first step you have to take is to pick one of these plots. These plots make use of three basic elements: a hero, a conflict, and a solution. If you have these, you’re good to go.

Many of the people who have written about the fairy tale genre say that a proper fairy tale must have a happy ending. However, the original authors of fairy tales show us otherwise. In Disney’s movie The Little Mermaid, the ending is happy. In the earlier tale written down by Hans Christian Anderson, however, it is a tragic end. You can decide whether your story should have a happy ending or not. While original folktales sometimes had dark resolutions, it’s always safe to conclude with the standard fairytale ending where good triumphs over evil.

How to Find Publishers for Your Book?

Many new authors find this part of the process overwhelming; here are three of the famous methods of finding publishers for your book. 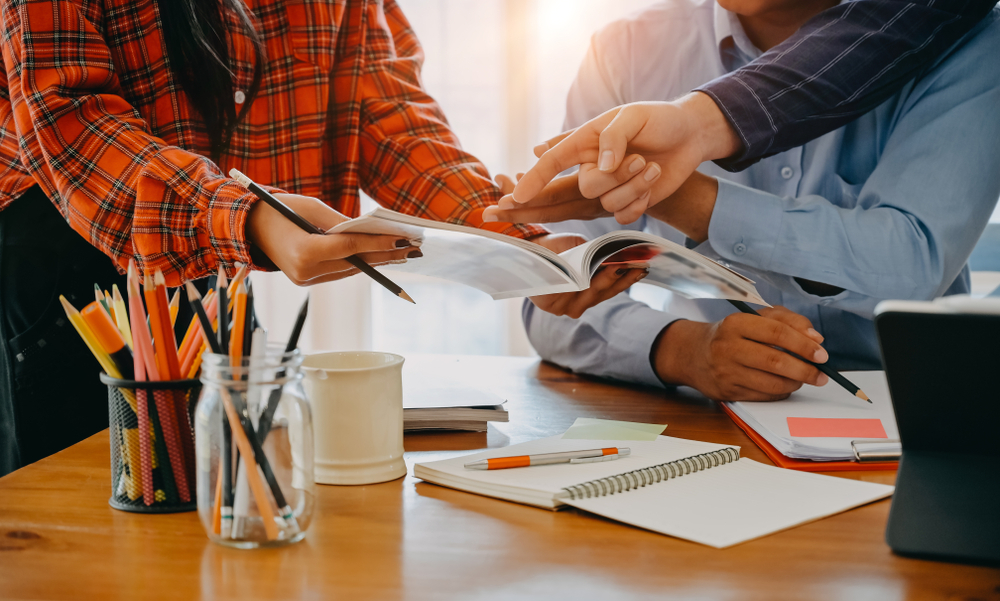 Getting a literary agent helps in easing the process of publishing. Part of the benefit to working with an agent is access to his or her relationships with editors—this is what gets their submissions to the top of the reading pile and what can help attract an offer. The other large benefit to working with a literary agent is that they will do the work of submitting your proposal or manuscript, following up, and negotiating a deal should an offer come through.

When it comes to doing any sort of research, the internet is one of the easiest approaches to take. If you already know of a publisher or two in your genre, try a standard internet search with that publisher’s name. This will lead you to their website, where you’ll find critical information such as what types of books the publisher is looking for, whether the publisher will consider unsolicited submissions and instructions on how to send your manuscript.

A number of printed resources are also available to help you find information on publishers. These books outline publishers that accept manuscripts from both agents and authors without agents. Information on guidelines and what publishers need is also outlined.

As you can see, there are a number of easy ways that you can find the best publisher to help you publish a book.

How Do You Get Your Book Published?

A book can be published either using the traditional methods or one could go for self-publishing. 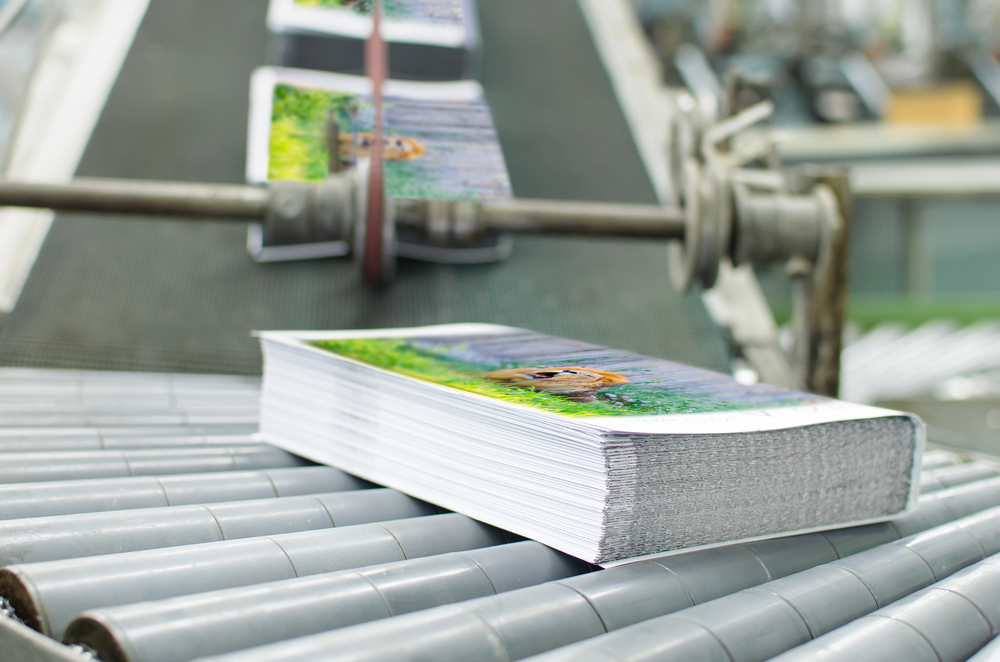 As an author, you should know what kinds of books people are buying. That will give you an idea of the books that publishers are looking to acquire and how YOUR book will fit into that space.

Step 2: Ask for feedback on your manuscript and edit

Your book doesn’t need to be the finest novel ever written, but it must be something its target audience will enjoy. For that reason, before you start looking for representation, consider working with beta readers: people with an interest in your genre who can offer you feedback from a third party perspective. Pay attention to what

they say, and self-edit based on their feedback. You might also consider working with professional developmental and copy editors.

While some small and medium-sized presses accept “unagented submissions,” you’ll find that your best bet to scoring a traditional publishing deal will be to first secure an agent. Not only do they have the right connections at publishing companies, but they

will also know how best to sell it to acquiring editors. In addition, pitching your book is just one of the many tasks that fall to an agent. They are also advisors and editors, who will give you objective advice on your manuscript and act as a buffer between you and the publisher. They are deeply familiar with the industry and should know how to negotiate the best price for your book (and

Step 4: Prepare your submission and send out queries

You send the agent a “query letter” that quickly pitches yourself and your novel. They request and read your manuscript and If they like your manuscript, they enter discussions regarding your book and career. You sign an agreement that allows the agent to represent your book.

Step 5: Work with your agent to find a publisher

You can expect to work with your agent to further develop your manuscript. In many cases, they’ll see potential in your book and will act as your first editor of sorts. Ideally, you will discuss how to make your book more sellable before signing with them. Once you’re both happy with the state of your manuscript, it’s then up to your agent to go out in the wilderness, pitch your book to publishers, and negotiate the best possible deal!

Hopefully, this article gave you some idea regarding writing and publishing your fairy tales.