Fade In: The Making of Star Trek: Insurrection by Michael Piller 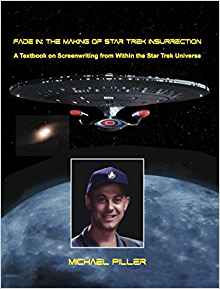 Fade In: The Making of Star Trek: Insurrection by Michael Piller

Michael Piller, who played a major role in saving the Star Trek franchise, has written not only a textbook on screenplay writing but also an inside look at the writing process that resulted in the franchise’s 1998 film Star Trek: Insurrection.
For students of film and television as well as for Star Trek fans – of which there are legions – this is a sought-after look at the screenwriting process from concept to final film script through the inclusion of treatments, story meetings, storyboards, and the moving of the Trek characters on the resultant creative chessboard. Fans, hungry for this kind of rare access, may well be thoroughly engrossed in and entertained by the book; whereas students of writing for television and film will definitely benefit from this textbook as not only reference material but also as an annotated resource on this particular film or on the entire Star Trek oeuvre, in general.